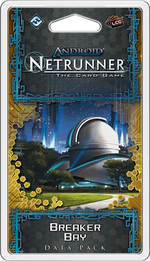 Breaker Bay is the second Data Pack in the SanSan cycle.

Breaker Bay was officially declared released by Fantasy flight games on April 23, 2015, just three weeks after The Valley.[1] The article gives a brief overview of the data pack, focusing mainly on how many of the cards give a sense of the set's narrative.

Retrieved from "https://ancur.fandom.com/wiki/Breaker_Bay?oldid=17551"
Community content is available under CC-BY-SA unless otherwise noted.