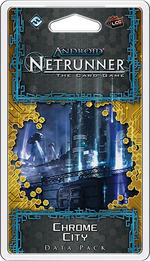 Chrome City was officially declared released by Fantasy flight games on May 29, 2015.[1] The article gives a brief overview of the data pack, going into detail about the cybernetics culture and the public agenda Oaktown Renovation.

Retrieved from "https://ancur.fandom.com/wiki/Chrome_City_Release?oldid=12881"
Community content is available under CC-BY-SA unless otherwise noted.