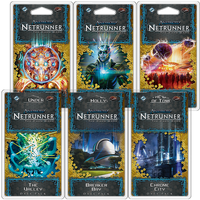 See also the List of cards in SanSan and the SanSan category.

The SanSan Cycle is the fourth cycle of Android: Netrunner expansions, released in 2015 between Order and Chaos and Data and Destiny, the fourth Deluxe Expansion.

SanSan Cycle is the first set of expansions where each expansion was designed separately from the others before being integrated into the cycle as a whole. Each Data Pack in the set has a strong focus on a particular area of the SanSan region, as well as a specific thematic and narrative exploration. This is highlighted by a heavier focus on meat space objects, places, and people rather than the cyberspace aspect of the theme.

It has been promised that the SanSan Cycle will feature a heavy anti-fast advance theme due to the Runners in the eponymous region being all too familiar with dirty Corp tricks and how to fight against them.

Retrieved from "https://ancur.fandom.com/wiki/SanSan?oldid=16921"
Community content is available under CC-BY-SA unless otherwise noted.